Hepatitis C is a flavivirus (of which yellow fever is the prototype) that causes non-A, non-B hepatitis. Flaviviruses (figure 5) are icosahedral, positive strand RNA viruses and gain an envelope from their host cell. The virus particle is about 30 to 60nm across. The genome of 9,600 bases codes for ten proteins. In many ways, the flaviviruses are similar to picornaviruses with the prominent exception that they are enveloped. The viral RNA does not have a 5’ cap or 3’ poly A tract. Translation of the viral RNA is mediated by the internal ribosome entry site (IRES).

There is one protein product from one open reading frame. The hepatitis C virus polyprotein is cleaved by both a virally-encoded protease activity and a cellular protease. The nascent protein contains a signal sequence that results in the translating ribosome attaching to the cytoplasmic surface of the endoplasmic reticulum. The envelope protein (E) thus crosses and embeds in the membrane and the signal sequence is removed by a cellular signal protease. This results in the remainder of the protein, the core protein, becoming cytoplasmic. It is cut by two viral proteases. The C-terminal domain of NS2 is a cysteine protease and cleaves at the NS2/NS3 junction. Another protease (NS3/4A serine protease) cleaves the remaining junctions.
Thus, the core protein is cut into NS1, NS2, NS3 and NS4 proteins. NS2 and NS4 are then cut again (to give NS2a, NS2b, NS4a and NS4b)
HCV binds to either the CD81 antigen or low density lipoprotein (LDL) receptor on hepatocytes via its E2 glycoprotein. There is also some evidence that it may bind to glycosaminoglycans.

Email ThisBlogThis!Share to TwitterShare to FacebookShare to Pinterest
Oznake: hepatitis C, The virus

Pegylated interferon is a man-made form of interferon, a chemical naturally produced in the body to fight viruses. Interferon helps to stop the hepatitis C virus (HCV) from making new copies of itself.


It also helps the immune system to kill HCV. Pegylated interferon is made with special add-on parts that help the drug stay in the body longer. It is injected once a week, while interferon that is not pegylated needs to be injected at least three times a week.

There are two brands of pegylated interferon: Pegasys and PEG-Intron. There are slight differences between the drugs, but both brands seem to work equally well and do not have major differences in side effects.

Both are used in combination with ribavirin to treat Hepatitis C virus (HCV) infection. If left untreated, HCV infection can lead to serious liver disease such as cirrhosis, liver cancer or death...

The liver is the primary organ antipollution, responsible for the removal of potential toxins from the bloodstream; filtered over a liter of blood per minute. In today's world, the liver receives more than its share of insults, of things such as car exhaust, smoke from others, pesticides, heavy metals, industrial solvents and household cleaners, not to mention over-the-counter and prescription drugs, food additives and various bacteria.
Hepatic Veno-occlusive disease is a potentially fatal cause of liver failure, usually attributed to exposure to plants containing toxic pyrrolizidine alkaloids.
Although it is commonly thought that ingestion of these alkaloids is not a problem in developed countries, cases of hepatic veno-occlusive disease have been reported from the United States, Great Britain and Switzerland, and at least two of these cases have been linked to the consumption of commercially available plant comfrey.

In a report in The Lancet notes that despite past warnings about toxicity, comfrey products are still advertised as herbal teas, plant root powder and capsules. Toxic levels of alkaloids are found in commercial preparations.
Pyrrolizidine alkaloid poisoning is difficult to diagnose, it may be necessary to obtain and analyze herbal preparations used by the patient to determine the cause liver failure. "The doctor and consumer awareness about plant toxicity is extremely limited, and the incidence of hepatic veno-occlusive disease and poisoning pyrrolizidine can be very underestimated."

Email ThisBlogThis!Share to TwitterShare to FacebookShare to Pinterest
Oznake: Herbal, tea, the liver

Clinically, the course of acute hepatitis varies widely from mild symptoms requiring no treatment to fulminant hepatic failure needing liver transplantation. Acute viral hepatitis is more likely to be asymptomatic in younger people. Symptomatic individuals may present after convalescent stage of 7 to 10 days, with the total illness lasting 2 to 6 weeks.
Initial features are of nonspecific flu-like symptoms, common to almost all acute viral infections and may include malaise, muscle and joint aches, fever, nausea or vomiting, diarrhea, and headache. More specific symptoms, which can be present in acute hepatitis from any cause, are: profound loss of appetite, aversion to smoking among smokers, dark urine, yellowing of the eyes and skin (i.e., jaundice) and abdominal discomfort. Physical findings are usually minimal, apart from jaundice (33%) and tender hepatomegaly (10%). There can be occasional lymphadenopathy (5%) or splenomegaly (5%).

Majority of patients will remain asymptomatic or mildly symptomatic, abnormal blood tests being the only manifestation. Features may be related to the extent of liver damage or the cause of hepatitis. Many experience return of symptoms related to acute hepatitis. Jaundice can be a late feature and may indicate extensive damage. Other features include abdominal fullness from enlarged liver or spleen, low grade fever and fluid retention (ascites). Extensive damage and scarring of liver (i.e., cirrhosis) leads to weight loss, easy bruising and bleeding tendencies. Acne, abnormal menstruation, lung scarring, inflammation of the thyroid gland and kidneys may be present in women with autoimmune hepatitis.
Findings on clinical examination are usually those of cirrhosis or are related to etiology. 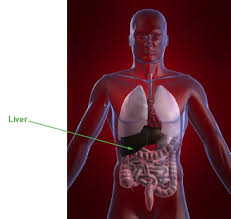 The liver is the only internal human organ capable of natural regeneration of lost tissue ; as little as 25% of a liver can regenerate into a whole liver.Currently, there is no artificial organ or device capable of emulating all the functions of the liver.An irregularly shaped, dome-like solid structure, the liver consists of two main parts (a larger right lobe and a smaller left lobe) and two minor lobes.

The liver is located just below the diaphragm primarily in the upper right part of the abdomen, mostly under the ribs,it also extends across the middle of the upper abdomen and part way into the left upper abdomen.This organ plays a major role in metabolism and has a number of functions in the body, including glycogen storage, decomposition of red blood cells, plasma protein synthesis, hormone production, and detoxification.A human liver normally weighs 1.44–1.66 kg (3.2–3.7 lb), [ 3 ] and is a soft, pinkish-brown, triangular organ.....